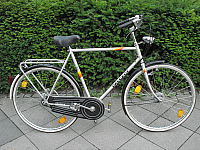 A few weeks ago I went down to Curacao to attend my friends’ wedding. Below are the pictures. Felicitaciones Jennefer y Fernando!

A few weeks ago I helped to organize a workshop in the Dominican Republic to help governments in the region share best experiences in the fields of education, outreach and public participation in climate change. All of this is enshrined in Article 6 of the United Nations Framework Convention on Climate Change (UNFCCC). See the presentation/animation that I put together for the event:

I was also impressed with a video shared by the representative from Jamaica. It really leverages the power that music can play in raising the general public’s awareness about climate change. See below:

For Eastern weekend I went to Amsterdam to visit friends and tour the sites. The visit included usual sights such as the Van Gough Museum, Anna Frank‘s house and a canal tour. We also walked around the Jordaan neighborhood, which we liked a lot (reminded us of NYC a little bit). Seeing old friends was great and we shared stories from days in Curacao.

However, I must say that one surprisingly great part of my trip was my discovery of the Crocs. Yes, the weird-looking sandals. I stopped by a Crocs store in Amsterdam and after trying a few pairs decided to go for a brand new pair. Now I can’t stop wearing them! They are really nice! See picture below:

A couple of weeks ago I visited Idstein in Germany to visit my friend Franziska Seel. Idstein was hosting a small music festival. We had a good time and learned about this nice looking town. I hope to visit again soon! Below some pictures!

Trying to catch Pearl Jam in Europe: Arras vs. Werchter vs. BBK Live?

As a newcomer to living in Europe, I am looking for possible venues to catch Pearl Jam at one of their stops during their European tour this summer. I seem to have already missed the window for the concert in Berlin but I am now trying to catch them somewhere else in Europe. My current options are: the Arras Festival in France, the Rock Werchter Festival in Belgium or the BBK Live Festival in Bilbao (I could also see them in the UK or in Italy, but the dates don’t work for me).

The Arras Festival seems like a good option given that it is relatively close by to Paris, so I could access it via train easily. The biggest plus is that Pearl Jam is playing with Ben Harper, so it would be a great opportunity to catch them both.

Rock Wechter is the closest to Germany and offers the opportunity to catch other bands and also spend some time in Belgium. It would be great to check out some chocolateries and breweries! I also haven’t been to Belgium in a while, and it would be good to visit, especially Ghent and Brugges!

Finally, the BBK Live Festival in Bilbao has its unique plus and minuses. The plus is that I could get to spend some days before and/or after the show in Bilbao and really spend the time learning about Basque culture. There is some great art and architecture, like the Guggenheim Museum by Frank Gehry, and of course excellent food! The minus is that it would be more expensive to get to Spain.

I’ll try to make my decision this week, so I’ll make sure to keep everyone posted and eventually share pictures and insights from wherever I decide to go!